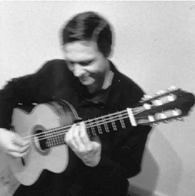 was born in Ludwigshafen in 1959. Taught by Thomas Pfau at the School of Music, Mannheim, he began very early with musical studies of the guitar. Later he studied guitar at the "Staatliche Hochschule für Musik und Darstellende Kunst Mannheim/ Heidelberg" (State College of Music and the Performing Arts Mannheim/ Heidelberg) with Jörg Wagner. He graduated with the degree "teacher of music" (diploma).

Thereafter, he participated in master classes of Prof. Karl Scheit (Vienna), Prof. Wolfgang Lendle (Saarbrücken) and Angelo Gilardino (Trivero), followed by studies in the master class of Angelo Gilardino in Biella at the "Academia Internazionale Superiore di Musica"where he received the diploma of a guitar soloist.

Even in the early days of studying, Harald Kühn performed frequently as a soloist and as a member of several different chamber music ensembles such as "Moments Musicaux" and "Ensemble 77".

He regularly collaborates with the mezzo-soprano Sandra Stahlheber, the violinist Istvan Kuruc, and the Chinese Erhu player Deng Xiao Mei. Together with Alberto Delle Piane, he established the guitar duo "Transalp" in 2002.